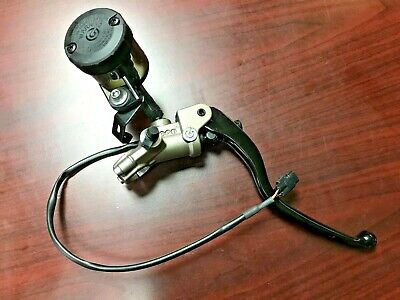 ZX10R 21 A 21 ZX10R Kawasaki. 2021 ZX10R. Front brake master cylinder, lever LIKE NEW. Mistakes do happen. If we should make a mistake we will correct it as quickly as possible. It must be followed.
www.ebay.com.au
R

Marco said:
Am I correct in saying that the pads a Z1000R comes with are not 'off the shelf ' Brembo parts? Are they made for Kawasaki by Brembo?
Click to expand...

Marco, I'm not sure, and I didn't mean for this Tobe long,.....sorry, but it . We would need to see the back of the pad to be sure. If the info I searched is true, this is what you have. For sure it's an ok pad, but the Vesrah would've an upgrade as would the higher cost Brembo pads.

Notice how most brake pads we see end with the two letters. I've seen "fg" "gg" or "hh". Yours end with HH. That's based on a friction rating scale they show in this other link. If the scale was 100% of the story, the ebc HH pad would be excellent,and that isn't true, so other things figure in,and the cost usually is higher for a premium pad. Notice that he is talking about cars....not motorcycles, but the scale still applies. The first letter is friction, when cold. The second is when it's hot.

All brake pads sold in the United States are supposed to have a DOT rating for friction stamped or printed on the pad. If you understand these ratings you can be sure you are choosing a pad that me…

So, your pads at least end up on the "HH" scale. My gsxr Brembo pads were Brembo, but ended with "gg". That tells you, right there, that my pads had lower friction than yours.

Honestly, the friction rating is like saying you have a silver car...great. Does that mean dark silver? Light? Metallic? Flat? We don't know,and that's how these pads are.

Galfer also sells an HH pad. Their pads are lousy, too. They gives soft lever feel,which few like,and they don't bite very hard. They make no sense until you have one of their nasty, wave rotors. Those bite so hard that you need a wimpy pad to deal with them. The sharp edge also destroys a good pad. It's est to avoid Galfer, entirely.

Ebc. HH is cheap. Their compound is noisy, their backing plates are not flat. They chew up rotors, so their low cost is more than offset once you figure that in.

I saw the"fg" on our bikes. The rear pads have an FG rating. That's part of why they last, forever, but don't work very well .
M


And here's the new ones


The oem ones aren't listed on Brembos website.
They are all over the Web for any make of bike that ever had M50 calipers at about a third of the price of the sintered pads.
R

Those new ones will be a nice upgrade. I believe . Isn't the cost insane? The quality pads are expensive.

When we see that "HH", I know it is a friction rating, but there must be a huge range. I wish you could try my Galfer pads. I did throw those away. They were HH rated, but of you put them in, you would swear I added air to your brake fluid.
M

Gen 4 Z1000 R Edition
Joined Aug 16, 2020
·
55 Posts
I got those for about 85 USD delivered from Italy to the UK. The best price I could get in the UK was just under twice that. You're point about the rear oem pads is right on the nose. I've a set of Brembo HH pads on the way.

Weather here is crap so I haven't tried them yet.
R

In the old days they did that to us because they didn't want inexperienced people locking the brakes. That sort of makes sense as a poor man's abs system. Now we have real abs, so I don't understand.

I converted mine to a brembo caliper a few years back. The carrier was expensive, and we had to order them from Japan. The caliper wasn't that bad. It made an incredible difference and it's nice to have a rear brake I can use,and trust.

You can calculate the leverage ratios here. Even though the chart goes back to the 1980's, it's still accurate. That's nuts. Our rear caliper uses a 38mm piston and a 14mm master cylinder . Completely off the chart for feel.
M

But once you use a premium set of pads, it's as nice as a set of high end tires. I think it's even a safety issue. It's not just about having more power. The feel is much improved, too. Especially the rear brake, but the front was a big deal, too.

Joined Apr 29, 2015
·
1,095 Posts
Which ones are you using at the moment sir....? Based on this thread i must confess ive hardly changed pads - ive got a set of Brembo branded ones on there ar the moment and theyre fucking awful.....the front almost squeeks when it finally comes to a half....bought them ages ago and kept them ready for the next change....changed them last year when it got written off.......im now definately a connoseieur of tyres and its my intention to get the best set of pads i can and try those...
R

Joined Jul 16, 2012
·
1,195 Posts
I wish I had more experience with the higher end pads. Once I found a brand I could trust, I stayed with them and was halfway afraid to experiment.

I'll use up a set of tires in a few months. If they suck, I'll have them worn out. Being stuck with brake pads, for several thousand miles, I was afraid of tuning into another set of Galfer or EBC type garbage if I tried something else.

I never found a source, in the USA, that had the Brembo pads for a reasonable price. The Vesrah rjl pads were more expensive than EBC, but not that much more.
M

rcannon said:
I wish I had more experience with the higher end pads. Once I found a brand I could trust, I stayed with them and was halfway afraid to experiment.

I'll use up a set of tires in a few months. If they suck, I'll have them worn out. Being stuck with brake pads, for several thousand miles, I was afraid of tuning into another set of Galfer or EBC type garbage if I tried something else.

I never found a source, in the USA, that had the Brembo pads for a reasonable price. The Vesrah rjl pads were more expensive than EBC, but not that much more.
Click to expand...

Yeah but which ones have you found to be the best so far?

Joined Jul 16, 2012
·
1,195 Posts
Make sure you clean your rotor, first. I like plain water and sandpaper. Brake cleaners often times leave residue. Water is fine. Just don't leave the disc wet. Go for a ride and heat it up before you finish the job.

You have to scrub the old pad from the rotor. If you don't, it takes forever for the new pad to work like it is supposed to work.

. If you just put them on,and ride, you usually end up with several hundred miles where the pads feel IDENTICAL to the old pad. It's crazy, but true.

EBC was horrible for this. If you put those on a dirty rotor, they work. In a few hundred miles, they start working as they work. Squeaking and leaving black dust all over the rim.
M

Gen 4 Z1000 R Edition
Joined Aug 16, 2020
·
55 Posts
Had another look at my OEM pads today. The manual says that the pad material should be 5mm thick. Mine were 4.50mm with 12,000 miles on them. Admittedly I only use the back brake in traffic and the odd time when cornering but that goes a long way to explaining how the feckin thing is so bad.
R

Odds are those would have still been good at 25,000 miles. There is pretty much zero chance of us walking into the shop and asking for warranty on our brake pads and getting into that awkward discussion over wear items vs defects.

Does that help explain why they chose that pad? I don't see us getting that kind of lifespan from our good pads, do you? I don't care if I only get 5000 miles, but I know people who would be bothered by that.
M

Gen 4 Z1000 R Edition
Joined Aug 16, 2020
·
55 Posts
No warranty on 'normal wear items' here. Batteries, chains, brake pads etc.
My thoughts were that whoever specified them would be made to throw himself on his sword because they last too long so they wouldn't be selling any replacements.
R

If you look at that pad, notice how many bikes it fits. The list is huge. Maybe that pad is just what the caliper is supplied with?

It's so bad that there has to be some reason for it's existence?
M

Gen 4 Z1000 R Edition
Joined Aug 16, 2020
·
55 Posts
Well I've had the Brembo pads in the rear caliper for a few weeks now and they haven't really made much difference. Slightly more braking power is about it. It still feels like you're pressing on a block of wood rather than a brake pedal.
R