Joined 7 mo ago
·
10 Posts
So I've got some forks off of a 4th gen Z on my Ninja 1000, and now I'm in search of a front fender. Unfortunately, new ones are on national back order, and there appears to be zero used ones for sale. Are there any other generation fenders that will fit? Anyone have a source for these things?

Joined 7 mo ago
·
10 Posts
I'm in the USA, California specifically. I have no idea what it would cost to ship, it's been about 20 years since I last had something shipped from the UK, haha! If I can't find any stateside, then I may just work out a deal with you.

Sent from my SM-G965F using Tapatalk

i like the standard weave in the matte finish on this one. 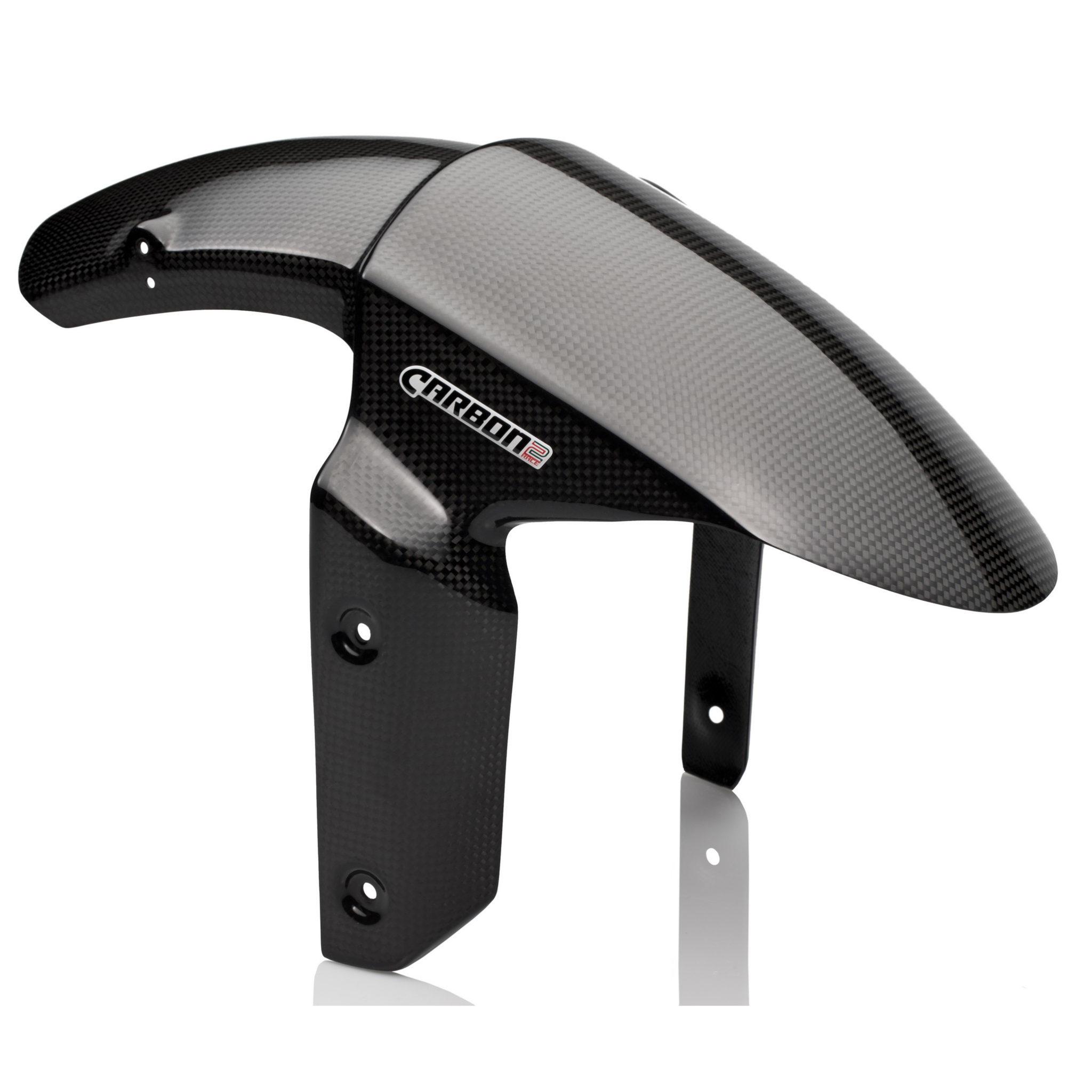 Improve the look of your bike, and prevent the splashing of water and dirt by using KAWASAKI Z 1000 2014-2020 Carbon Fiber Front Fender

Joined 7 mo ago
·
10 Posts
Yeah, I saw all he CF options, but they're too expensive(though the motocomposites one is very reasonable for CF, and the blue looks pretty good), and overkill for what I need. Besides, CF would look out of place on my standard looking Ninja 1000. Plus I commute on it, and the bike spends 100% of it's life outdoors, often baking in direct sunlight all day at work, so the CF would get trashed looking/yellowed pretty darn quick. A standard stock unit would be more appropriate for my use.

How did you fit the 4th gen forks on your ninja? Did you mill out the lower triple clamp by 1mm or are you also using the 4th gen lower clamp? I ask because I've done this conversion myself and I went the custom machining route.

As for fender, my 3rd gen uses a very unique full fairing fender, which I really wanted to keep, so I made up a custom bracket to fit the original to the 4th gen forks

Joined 7 mo ago
·
10 Posts
My Ninja is a 4th gen, so it's already got the correct lower clamp.

So a ZX6R fender should fit. I had previously bought a used fender off of ebay, and it stated it would fit a ZX6R and a Z1K. I guess the ebay seller just had the wrong year listed then. Figures, I just found a Kawasaki parts place that has the Z1K fenders in stock, and just placed the order. Now I wonder if I should just cancel it and get a used ZX fender off of ebay.

novaks47 said:
My Ninja is a 4th gen, so it's already got the correct lower clamp.

So a ZX6R fender should fit. I had previously bought a used fender off of ebay, and it stated it would fit a ZX6R and a Z1K. I guess the ebay seller just had the wrong year listed then. Figures, I just found a Kawasaki parts place that has the Z1K fenders in stock, and just placed the order. Now I wonder if I should just cancel it and get a used ZX fender off of ebay.
Click to expand...

The 4th gen Z forks are if I'm not mistaken about 30mm shorter than the ninja forks, are you lowering the rear shock to match? If so, you will need to use 4th gen Z rear linkages for the rear, which drops 25mm over the stock Ninja, which is identical to the 3rd gen Z
N

Ungarisch said:
The 4th gen Z forks are if I'm not mistaken about 30mm shorter than the ninja forks, are you lowering the rear shock to match? If so, you will need to use 4th gen Z rear linkages for the rear, which drops 25mm over the stock Ninja, which is identical to the 3rd gen Z
Click to expand...

20mm lower. I know, I bought the forks and linkage from you. 😆 It's all on the Ninja already, it was a very easy swap. I spent more time pulling stuff off to access the needed bolts than actually swapping the parts, lmao!

Joined Feb 26, 2019
·
381 Posts
oh! now it makes sense. In that case you need a 3rd gen fender, not a 4th gen since my bike is a 3rd gen. 4th gen is a completely different animal. Or make an adapter similar to what I show above, but obviously the inverse.

Not sure what color your ninja is (I'm gonna guess it's green), but there is a guy local to me parting out a 3rd gen which I might be able to get the fender off of and ship to you.

Joined 7 mo ago
·
10 Posts
Oh ****, why did I think they were 4th gen, lol! Guess I need to cancel some orders! Explains why the ABS sensor was so far off on fitment. Should I have swapped the lower clamp then? They seemed to fit? Dang it, I really dug myself a hole, lol.

Joined Feb 26, 2019
·
381 Posts
no, the lower triple clamp only needs to be swapped if you're installing 4th gen Z forks, which are NOT a direct swap (they are basically ZX6r forks), completely different to those on the Ninja 1000 and the 3rd gen Z. Your Ninja 1000 should be more or less the same forks as the 3rd gen Z other than the aforementioned fender mounts, which is why I'm surprised that you say your ABS sensor was off. Both bikes use the same ABS pick-up wheel, so the location of the sensor should be relatively in the same (radial) position on the caliper standoffs.

Besides the 3d gen fender, you really should not need anything else for this swap.

Here is the Ninja sensor location

Joined Feb 26, 2019
·
381 Posts
for my own curiosity's sake, I have superimposed images of the Z and N1K front wheels on top of eachother in Photoshop, and I can confirm that the ABS sensor locations are 100% in the identical locations on both bikes, they perfectly line up on top of eachother. You can also see how far off the fender bolts are from each other. The bolts closest to the fork are the 3rd gen forks and the ones farthest are the Ninja's bolts. The difference is 14mm

Yeah, the sensor is in the same spot, but the hole it goes into is a different diameter, and the spacing between the sensor and the bolt hole is different than my '14, so they changed that much from 3rd to 4th gen. However, the hole still lines up with the sensor wheel, so I should just need to get a 3rd gen sensor, and see if it plays nice with the 4th gen stuff.

The fender mount on the 3rd gen forks are also a bit wider than the 4th gen Ninja's. So far as I could tell when I tried to put my fender on just for grins, the little fork leg covers where too narrow.

Joined Feb 26, 2019
·
381 Posts
what year is your Ninja? Wouldn't a 4th gen Ninja be a 2020 and up model? At least according to wikipedia. The 2020 and up got some major revisions to it's suspension, which is why when I listed the forks for sale, I listed a few caveats that are required for those bikes, such as different lower clamp and different wheel spacers.
N

EDIT : I had almost forgotten, I did measure the fork tubes before installing them, and there was no difference, so I doubt the lower clamp changed. I'll measure again later today to verify. I suspect the Z1K saw some major changes well before the N1K.
N

Joined 7 mo ago
·
10 Posts
Did some more digging, and it's definitely a 3rd gen vs 4th gen thing with the sensor. Not only is the sensor different, but so is the connector. Who knows if the sensor will even play nice with the 4th gen ecu, but I doubt it's anything other than a two-wire setup, so unless Kawi changed the expected resistance values, it might just work. The 3rd gen Ninja and Z forks and sensors where identical save for overall fork length, but for '14 and up they changed the sensors. Looks like Kawi changed more than I realized! Oh well, that's how parts swapping goes sometimes.
1 - 18 of 18 Posts
Join the discussion
Continue with Facebook
Continue with Google
or sign up with email
About this Discussion
17 Replies
4 Participants
Last post:
novaks47 19 d ago
Kawasaki Z1000 Forum
A forum community dedicated to Kawasaki Z1000 motorcycle owners and enthusiasts. Come join the discussion about performance, parts, troubleshooting, maintenance, modifications, classifieds, and more! Open to the Z800 and Z900 models too!
Full Forum Listing
Explore Our Forums
Kawasaki Z1000 General Discussion Z1000 Performance Z1000 Appearance and Modifications Z1000 Parts and Accessories Z1000 New Member Introductions
Recommended Communities